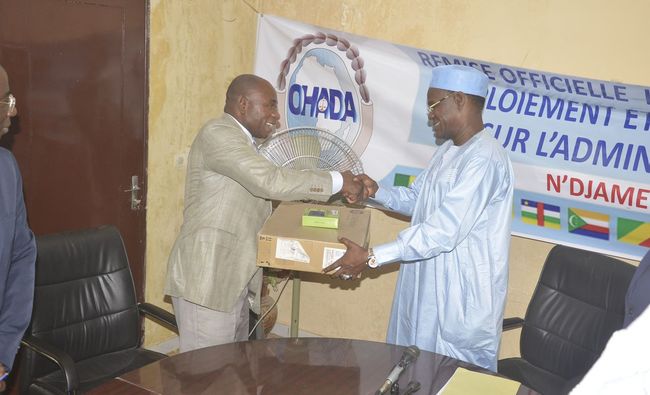 Continue Reading Deployment of the computerized RCCM in Chad

Douala (Cameroon), January 16-17, 2020 From 16 to 17 January 2020, an international symposium on the Settlement of Investment Disputes through Arbitration and Mediation in OHADA Area was held in…

Continue Reading On the way to Burundi’s accession to OHADA: Conference to promote OHADA law in Burundi on February 7, 2020 in Bujumbura.

With the entry into force of the African Continental Free Trade Area, a flagship project of the African Union on 7 July, the continent has established itself as the largest integrated free trade area in the world after the World Trade Organization. The AfCFTA will cover a market of 1.2 billion people (doubling by 2050), representing a GDP of $2.5 trillion. However, if preferential liberalization were not supported by well-designed and enforced laws on economic activity by African companies, the globalization of African trade would not take place. Yet, who else than the Organization for the Harmonization of Business Law in Africa can boast about these skills, which have been proven since its creation 26 years ago? It is essential that AfCFTA should rely on the harmonization of business laws guaranteed by OHADA to achieve its goal of continental free trade. It is hence worth recalling that: OHADA is the vehicle for a harmonized business law in Africa Through its work of unification of law, OHADA provides a firewall to the fragmentation of business law and the isolation of its 17 Member States. As such, it is crucial that this organization be part of the regional harmonization programs implemented in Africa. The Heads of State of OHADA, moreover, recalled this need by advocating "an intense promotion of the organisation to the AU, in order to make it a privileged tool for the production and promotion of Business Law[1]". OHADA's participation is indeed the way to avoid any conflict of laws emanating from community integration organisations. It is also the means of avoiding any conflicts between their common jurisdictions. The draft European Business Code is a cautionary case of OHADA's internationally recognised success. The African continent States have thus succeeded where Europe is still trampling: confronted with a diversity of legal systems that weaken their capacity to generate growth, they have achieved a more secure, accessible codification of business law. OHADA is the voice of all States on the continent We must reconsider the starting point for a new policy for the harmonisation of the laws in force within the OHADA zone with those of the other countries of the AfCFTA (South Africa, Nigeria, Ghana, Rwanda, Kenya, Ethiopia, Tanzania, etc.): it is essential to take into account the pan-African vocation of the Community law maker. Economically powerful countries will defend their position within the AfCFTA as a group and only OHADA will be able to make the voice of all states heard. It should be recalled that this organisation is able to take into consideration the expectations of the continent's economic heavyweights, having among its members, non-French-speaking States or those which do not belong to the legal tradition of continental law. Finally, the jurisdiction of the Common Court of Justice and Arbitration is more justified as it deals with all disputes concerning OHADA law, whether or not they arise between its member countries. Not to mention the arbitration and mediation initiated by this organization, which have no geographical limits. The sustainability of alternative dispute resolution methods depends on it: the voices of all litigants using it on the continent must be heard as much as those of the arbitration centres of the African economy giants. The Common Court of Justice and Arbitration is the supra-state court that secures investments With ten uniform acts directly applicable within its Member States, OHADA law is described as brutal law. And the CCJA is currently the only regional court, with more than 300 judgments per year, capable of bending the obstacles to the continent's development, including States. While Africa is the continent where corruption is highly strong, OHADA offers the royal jurisdiction for investment security, which is an essential component of any development policy. Finally, the CCJA will enable, through its successful experience of interpretation in a regional context, the different legal rules of the States of the AfCFTA consideration. Considering the urgency, the Permanent Secretary of OHADA, Professor Emmanuel Sibidi Darankoum, requests: - That the African Union integrate OHADA into the ongoing work on the establishment of AfCFTA; - That OHADA be given a commissioner's position at the headquarters of AfCFTA A symposium will be organized by the organization on this necessity next spring. [1] Ouagadougou Conference of Heads of State, 17 October 2013: https://www.ohada.org/images/pdf/COMMUNIQUE-FINAL-SIGNE-PAR-LE-PRESIDENT-DU-FASO.pdf

Lyon, 3rd edition of OHADA Day, November 14th, 2018 Professor Dorothé C. SOSSA, Permanent Secretary of OHADA, participated in the conference during the 3rd edition of the OHADA Day in…