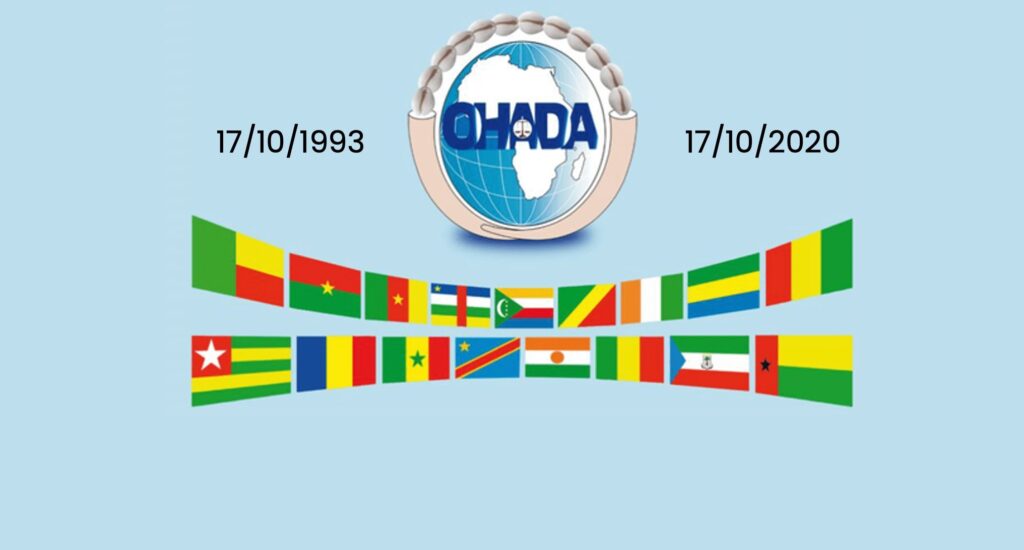 Message from the Permanent Secretary, on the occasion of the celebration

of the 27 th anniversary of OHADA

On October 17, 1993, the founding Treaty of the Organization for the Harmonization of Business Law in Africa (OHADA) was signed in Port-Louis (Mauritius). Since then, 27 years have passed in which African states have shown their confidence in OHADA as a tool for socio-economic development and an original system for settling business disputes.

At the origins of the creation of OHADA, the search for solutions to the economic difficulties of African States. Legal and judicial insecurity having been identified as major causes of investor distrust. The establishment of OHADA was mainly motivated by an economic imperative, marked by a context of widespread recession in the continent’s economies. Three evils were plaguing the African continent, namely the difficulty of African economies in the face of the challenges of globalisation; the recession and the drastic decline in the level of investment; and investor distrust. The Organisation was charged with the task of resolving legal and judicial insecurity in order to restore a climate of confidence conducive to investment, make markets more attractive, businesses more competitive, and thus create a new pole of development in Africa. OHADA’s mission is to guarantee legal security for economic activities in order to stimulate investment and create a new pole of development in Africa. More than ever, OHADA intends to assume its responsibilities for securing economic activities, as an instrument for growth and safeguarding businesses.

Economic integration, an indispensable condition for Africa’s development, can only be achieved effectively if it is accompanied and supported by the harmonisation of business law. In this respect, the effective establishment of a continental free trade area in Africa (FTAA) is of the utmost importance to OHADA. The Organization will be all the more able to rise to this challenge as it will have lifted certain constraints considered essential. The FTAAf will cover a market of 1.2 billion people (with double that number expected in 2050), representing a GDP of 2,500 billion dollars. However, if preferential liberalisation is not backed up by well-designed and enforced economic activity legislation for the continent’s businesses, the globalisation of African trade will not take place.

OHADA’s participation is indeed the means to avoid conflicts of law emanating from community integration organisations. It is also the vector that will make it possible to avoid any conflicts between their Community jurisdictions. The draft European Business Code is an edifying example of OHADA’s world-renowned success. The States of the African continent have thus succeeded where Europe still sins: faced with a diversity of legal systems that weaken their capacity to generate growth, they have achieved a codification that makes business law more secure and accessible.

The year 2020 has been characterised by the health crisis of the COVID 19 pandemic, which has disrupted lifestyles and brought about socio-economic changes. Although affected by this health crisis, the level of contamination of which varies from one country in the OHADA zone to another, the effects of the pandemic could prove disastrous for the economic growth of the countries in the OHADA zone, for the acceleration of unemployment, the fall in production, the destruction of value chains and the considerable reduction in foreign investment, if diligent measures are not taken.

OHADA is also targeting new areas of legislation in order to provide an increasingly appropriate response to the legal needs of economic players. These include emerging issues such as corporate social responsibility (CSR), electronic transactions, but also conflicts of law and the circulation of public acts, franchising, joint ventures and contractual standardisation. The Organisation is pursuing its geographical expansion, in line with its pan-African ambition for the forthcoming membership of English, Spanish and Portuguese-speaking countries.

In its twenty-seven years of existence, OHADA has established itself, in Africa and throughout the world, as an original model of dynamic legal integration.

Efforts remain to be made, of course, on the full operationalisation of multilingualism, the finalisation, eagerly awaited by the credit market, of the process of computerisation of the trade and personal property credit register, contractual standardisation, adequate support for the business community, the setting up of mediation clinics, the strategy for the development of arbitration, among others.

On the occasion of this 27th anniversary, I would like to: express the Organization’s sincere gratitude to the Member States, whose attention has never been lacking; thank our various technical and financial partners, who have mobilized to accompany the legal revolution inaugurated by OHADA; pay a heartfelt tribute to the founding fathers of OHADA, who were able to endow Africa with such a precious tool; wish OHADA success and influence.

Happy Birthday to the OHADA Community!